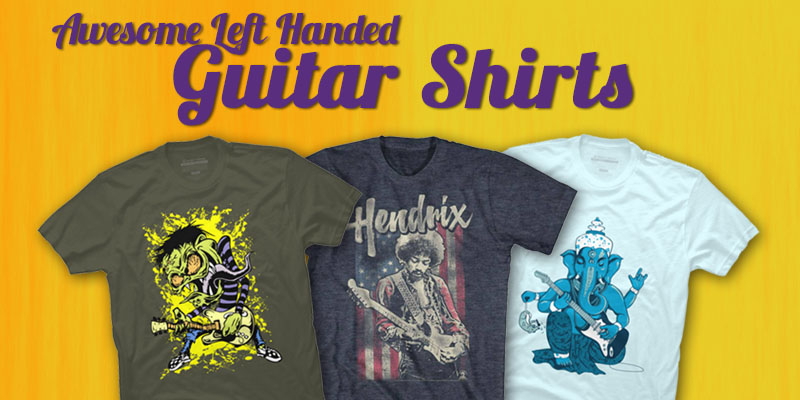 You got the badass GUITAR slung around your neck…
You got the kickass rock star POSES down…
You even got that guitar FACE going on!

Now, what about the cool clothes to go with those that will set you apart from the rest of the crowd?

Wouldn’t it be great if we lefties could find some cool left handed guitar shirts to wear? There aren’t that many out there, but they are definitely out there if you look hard enough!

I think it’s fair to say that most guitarists enjoy wearing t-shirts, especially music-related t-shirts that have a unique design, and rarely seen anywhere else. So what better way to show off your individuality than to proudly wear some cool-looking left handed guitar shirts!

It’d be a lie to say that left handed guitarists have a vast range of guitars to choose from compared to right handed folks. The same can be said for apparel; t-shirts, hoodies, and the like… I’d say we have even less choice when it comes to showing our lefty pride in the clothing we wear!

I did find quite a lot more than the ones listed here, but quite frankly, I just wasn’t very keen on the designs very much.

Please note: Some of the links on this page are affiliate links, which means that at no extra cost to you, if you decide to make a purchase when you click through I may get a small commission. If you do buy something, then I’d like to say “thank you so much”! It really does help me keep this website going.

Have a peek at these…

What’s cooler than a zombie rocking out? Not a lot, I reckon, and this one looks like he’s got plenty of attitude! Do zombies actually have the brains to be able to rock out?! I guess this one does!

I just love the way the design on this shirt is drawn, from the checkered shoes and striped top to the low-slung lefty guitar! This zombie looks like one devilish rock star! Its face, with its tongue out and the stitches in the forehead all add up to one wicked-looking t-shirt! The spattered background suits the comic book feel of the shirt too.

Ganesha is probably best recognized by the fact that he has an elephant’s head, but in this shirt, he can also be recognized by his left handed strat-style guitar. He looks pretty Zen here, demonstrating self-restraint and inner peace, but the raised devil horns and his ratty friend on the mic say otherwise!

This ancient god has probably been rocking out throughout the ages! With four arms as well, I bet he sure can shred some! 16-fingered tapping anyone?

Here we can see a left handed panda holding what appears to be a left handed Gibson Flying V. Do pandas have a particular handedness? Who knows, but this panda looks quite comfortable with this axe, as though playing guitar is second nature to it.

To me, it doesn’t particularly look very Death Metal, but it’s definitely a cool-looking print and logo all the same. There’s a pretty cool green version too!

This lefty mermaid, with a serene look on her face and a left handed acoustic guitar in her hands, looks like she could be a gentle acoustic music lover. However, her undulating red hair looks reminiscent of the snake hair of the Medusa of Greek Mythology!

Let’s not forget, that mermaids could well have come from the Sirens of Greek Mythology too… Maybe she’s not so innocent after all!

Here we have the lovable greedy guzzling ghost from the famed Ghostbusters movies. Here, he resembles Kerry King of Slayer, armed with a similar V-style guitar, a studded wristband, and raising the Devil Horns with his left hand.

King is known for playing B.C.Rich and Dean guitars.

This is a cool-looking print showing both humor and attitude!

The Last Song of Autumn

The woman on this shirt looks like she could be the coolest female assassin!

Although she is playing a Shamisen (a traditional three-stringed instrument from Japan), rather than a guitar, the blind Japanese woman playing it is clearly left handed! Could it be that the Shamisen is hiding a deadly weapon within? Maybe with her heightened sense of hearing, she can locate her target with sound waves; she’s ready to strike!

Rock on indeed, Dino! The dinosaur on this t-shirt looks like it knows how to have a good time! Look at the joy on its face! Or is that a snarl or even a roar? Aaaarrrghhh! Big scary sharp teeth! Help!

Either way, I’m sure it’s playing some earth-shattering rock music!

Notice how the lefty Flying V-style guitar it’s holding has only three strings. Maybe it’s got something to do with the fact that this dino has only three fingers! Watch out for those sharp claws!

What? Is this seriously a monster? It doesn’t look like a scary monster to me… More like a scared monster! Maybe it’s scared of the monstrously pounding bass emanating from its teeny tiny speaker… Hmmm, on second thoughts, maybe not.

Either way, this is a fun-looking shirt; who knows what it’s trying to say!

Positive Grid Spark 40 Amp reviewed! Is it any good?

Wow! This panda looks a little angry! I think it must be playing some kind of angry rock song. Hear it growl! GRRRRRRR!!!!

This is the second t-shirt in this list that features the normally lovable panda. Pandas are usually seen to be gentle, docile creatures, but by the looks of it, this one knows how to ROCK!! Why not show everyone your inner Rock Panda with this humorous t-shirt?

Here we have some kind of robotic android amplifier, and it’s playing a left handed guitar! I guess it must have been programmed by one of us lefties. Is it playing some Techno Rock?

I reckon it looks like it could be performing at an interstellar music festival in the far reaches of outer space! Maybe C-3PO, R2D2, and BB-8 are in the audience somewhere…

“Where is the guitar?” I hear you ask. It’s hidden somewhere behind that unstoppable, cascading mass of facial hair. But even with all that beard in the way, nothing is gonna stop this guy from playing his guitar!

Not even beer, which he’s obviously had at least a couple of. One thing I’d warn this guy about though is to remember to keep his guitar dry!

Here’s a cool-looking t-shirt of that most famous lefty guitarist; Jimi Hendrix! It’s a classic image of him playing one of his famed left handed Fender Stratocasters, printed with the US flag in the background. You’ll look great in this left handed guitar shirt!

Another t-shirt of Jimi Hendrix! This time he’s playing one of his famed left handed Fender Stratocasters! I really like the retro look of this one.

Here’s a Nirvana shirt featuring Kurt Cobain’s famous lefty Fender Jag-Stang, as well as telling us the band’s city and year of formation; Seattle, WA in 1988.

Now ya got everything you need to know; go listen to some of their music!

And buy this t-shirt.

These shirts that feature a particular person can sometimes be just a simple design and this one is no different. It’s an image of a left handed guitar player, whose face you can’t see, but there’s no mistaking that this is grunge icon Kurt Cobain. Not much to it, but still pretty cool.

I think this t-shirt featuring a Wings-era Paul McCartney wearing headphones and playing a lefty bass guitar in front of some recording equipment, looks very cool!

Here’s a second Paul McCartney t-shirt. Yet again, it’s a monochrome photograph of our Macca; this time he’s playing a six-string guitar. Ever present are some headphones… What is it with headphones that Paul loves so much?!

Classic anime fans may be interested in this one.

Is this Ted from the 2012 movie of the same name? Sure looks like him!

Anyway, here’s a teddy bear jamming away on what looks like an Ibanez RG series guitar. I bet he’s a fan of ’80s Bear Metal!

Here’s one of the apes from the “Dawn of Man” scene from that movie. This ape has just found out he can hit stuff with his lefty Stratocaster! Aaaaaaarrrrgggghhhhh! Get out of the waaaayyyyy!!!!

This t-shirt features a great shot of Otis Rush playing live at a blues festival with his trusty Gibson ES-335.

This shirt features a caricature of the left handed Blues legend Albert King playing his Gibson Flying V; one of the Three Kings, and at one time claiming to be B.B.King’s half-brother!

Show your appreciation for this Blues icon!

This second Albert King t-shirt, and the last t-shirt in this list, has a print of Albert King during one of his live performances. Singing with passion and giving his soul to his music, the Blues; this shirt really captures the moment. King is singing his heart out with his customary right handed, upside-down Gibson Flying V in hand.

Wow! It’s taken me a while to find and choose which shirts to include in this list, but here you have my choice for some awesome looking left handed guitar shirts. I hope you like them!

Which of these designs are your favorites? Did you find any other shirt designs for left handed guitar players? Let me know in the comments below!

Left Handed Gibson Les Paul Studio Review – Is It As Good As the Standard Model?