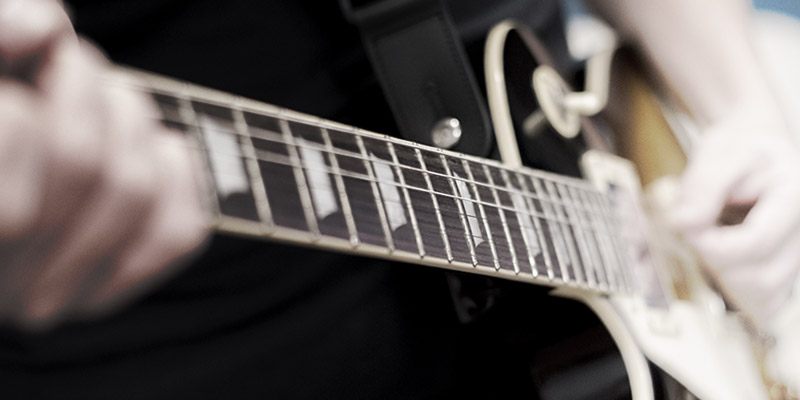 Buying your first guitar can be an exciting thing, but without any prior knowledge, how do you know what to get?

So, before you actually buy the thing, there are a few things about guitars that you may need need to consider beforehand. When I got my first guitar, I didn’t know anything about choosing one or what considerations I needed to think about. Before I talk about that though, I’m gonna talk about…

How and Why I Got My First Guitar

Before I get into when I got my first guitar, I’ll start with a little bit about me and when I found my love of guitar music.

It was at a time that I was listening to a lot of music on the radio. I was around twelve years old, and I hadn’t got my first guitar yet; I hadn’t even considered it. Most of what I listened to up until this time was the usual pop music and stuff in the charts, but then I discovered hard rock and heavy metal! I loved it, and I would play air guitar to AC/DC, ZZ Top, Scorpions, Megadeth, Extreme, Mr. Big, and more. I guess this was the first time I consciously sought guitar music.

Fast-forward a year or so, I started getting into the British indie music scene; Carter the Unstoppable Sex Machine, Primal Scream, Teenage Fanclub, Stone Roses, and bands of that ilk. This music was still guitar-driven; many of the bands drew influence from folk-rock and psychedelic rock from the sixties, the punk movement of the seventies, and the new wave bands of the early eighties.

While being much more guitar-oriented than the pop music I had previously been listening to, it was still quite simple, much less complicated than the rock and metal I’d discovered, so it gave me the notion that “I can do that!”.

Those bands had a kind of raw and unpolished sound to them, with a DIY attitude, and it was at this point that I picked up my dad’s old classical guitar from the cupboard; he never played it, so I started messing around with it and tried to make my own music.

It sounded horrible! I had no idea what I was doing. Luckily my dad also had a couple of guitar books, also in the cupboard, so I had a read and realized that I was holding the guitar differently from the guy in the pictures. It was upside down and the strings were the wrong way round! No wonder it sounded horrible! That and the fact that I didn’t know how to play anything or how to tune the thing up!

I tried turning the guitar the other way up and learning some simple chords from the book, but it felt weird; it was so much more comfortable the other way around. I ended up reversing the strings and played it the way a normal lefty would… and so began my time as a Lefty Guitarist.

After I’d learned a handful of open and barre chords, and a few strumming patterns, I decided to ask my parents if I could learn to play on my own electric guitar. After all, the bands I listened to played electric, so why not me? 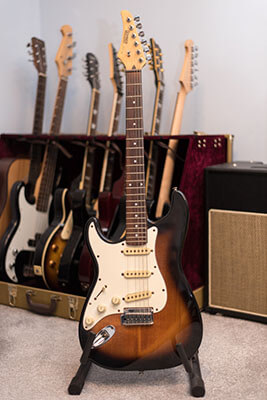 Being the understanding and supportive parents they are, I was given a brand new Hohner Professional ST59 electric guitar, and a Marathon model mx22 amplifier, along with some guitar lessons. My dad had found a local guitar teacher, who had recommended the ST59 as a good beginner’s guitar.

I had no clue as to what constituted “a good beginner’s guitar”; I definitely have a much better idea of it now, but then I guess I’m not a beginner anymore.

Anyway, I was so happy! Finally, I could start to learn to play properly. I’d only had a few lessons though; at school, my exams were coming up, so my parents had said that I would need to stop my guitar lessons until after my exams were over, and unfortunately, that is where my guitar lessons ended for good. I never went back to them, so I had only learned a few things, such as a few new chords, the pentatonic major scale, the pentatonic minor scale, and some basic music notation.

Was Self-Teaching the Way to Go?

Over the next five years or so, I didn’t really progress much further, and was basically just playing the same stuff that I had learned with my guitar teacher five years ago, and wasn’t really all that motivated to learn anything new. I was good enough to work out how to play some music of the bands I listened to, but not nearly enough to be considered good. I couldn’t really use the stuff I’d learned previously in a practical way.

However, I still loved the guitar, and often play guitar with my friend and next-door neighbor Steve, who is also left handed, and he played a USA Fender Stratocaster. Steve introduced me to loads of guitar music; mainly blues and blues-rock, so I found a new avenue of inspiration for my playing.

Soon after this time, I was about to head off to university and of course, I took my guitar and amp with me. It was while at university that I met my friend Neil, who in the following year would become one of my housemates. Neil also played the guitar, and when I heard him play, I couldn’t believe how good he was! He also had an American Fender Stratocaster, and a Fender Twin Reverb amp, and his playing was so fast and fluid; I wished that I could play as well as him, but I was nowhere near!

This spurred me on to buy some books and teach myself to play better. I bought a lesson book and a couple of guitar tab books of bands I liked at the time and managed to improve a little over time.

Neil was a big fan of the blues and a massive fan of Stevie Ray Vaughan. I was already into players like Jimi Hendrix and Rory Gallagher and enjoyed blues-based rock like the aforementioned AC/DC, Scorpions, and ZZ Top, but this was the first time that I had ever heard of SRV, but I immediately loved the sound of his music.

This made me want to play the blues, and so I improved on my pentatonic minor scale improvisation and practiced the 12-bar blues that I had learned in my earlier guitar lessons, and I very slowly but surely progressed, but not by a lot! Looking back, I don’t think self-teaching was the right way to go, not for me anyway; maybe I should have invested in a teacher again, but any progress is better than none right?

Since then, I have improved quite a lot; still not amazing at playing, but I enjoy it now more than ever. With the internet and YouTube, it’s so much easier to find learning materials, and learning the guitar is accessible to most nowadays. I think I have learned quite a lot over the years, albeit slower than I’d have liked, but I think I can help any beginners out there. Which leads us onto…

Buying Your First Guitar – What To Look For When Choosing

There are a few things you will need to ask yourself before you buy your first guitar, so I have put together a short list of what you may want to consider first.

Go Get That Guitar!

Hopefully, this short list will help point you in the right direction in choosing the right guitar for you. If you still don’t have any idea what guitar to go for, have a look at some of my recommendations here. Good luck, now go get it!

If you have any questions, comments, or suggestions, please let me know below.