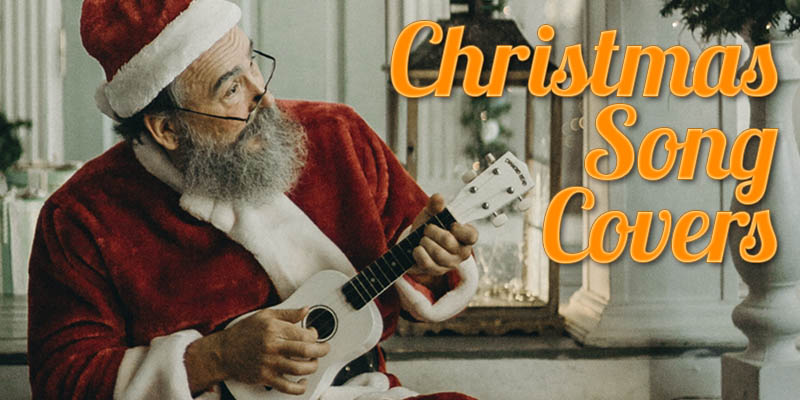 It’s that time of year again; the holiday season where so many artists release Christmas songs. Every year we see so many musicians and recording artists, from the little-known guy down the street, all the way to huge stars such as Katy Perry, Taylor Swift, Justin Bieber, Michael Bublé, etc. sharing either new Christmas songs or Christmas song covers for all to enjoy.

And each year, these songs get played like crazy, even though they’ve already been heard millions of times each, but such is their popularity that there’s always a new version by some other artist released each year.

Among these, many guitarists also record their own Christmas song covers and then uploaded them to YouTube for us all to listen to and comment on.

Personally, I’m a fan of when a guitarist rearranges the songs and adds their own flourishes to the playing of their rendition of that song. Even if they totally change the feel of a song, it can be a pretty cool thing to hear.

Now, I know not everyone reading this celebrates Christmas, or may not be Christian, or even like Christmas, but I think these Christmas cover songs can still be enjoyed on musical merit alone.

Whether it’s some kind of shred guitar cover or a heartfelt emotional rendition of a slower piece, there are plenty of Christmas song covers out there for us all to enjoy.

Need help with guitar gift ideas this holiday season? Check out this list of fantastic guitar presents to get for your friends or yourself!

So without further ado, here are my favorite guitar covers of Christmas songs by guitarists over the last few years.

Here’s a slightly heavier cover version than some of the other recordings on this list. With his Jackson Kelly, there’s loads of sweeping and fast playing on this one.

And with that look on his face, Patrick Hemer is truly demonstrating the immense joy he’s feeling during the festive season!

I only became aware of Steve From Boston and his channel earlier this year, when he demonstrated the Positive Grid Spark Amp. He’s a likable and easy to listen to kind of guy, and his playing here sounds great on his Gibson Les Paul and seems so effortless.

Here we have a good, fun video of Santa Claus performing the classic José Feliciano song Feliz Navidad! Who knew Santa could rock so well?!

Nice use of harmonics in the intro, and an enjoyably awkward ending!

#10 Kfir Ochaion – All I Want For Christmas Is You

First thing’s first; I’m really not a fan of the Mariah Carey Christmas hit, but this goes quite some way in getting me to not mind the song at least! Actually, I really do think this version is very good; it sounds much better to my ears with a distorted Fender Strat! It’s a version I’d be much happier listening to than the original. Sorry to all you Mariah Carey fans out there!

Anyway, he’s recently uploaded a newer version for 2020, but I kinda prefer this older one from 2017.

I know, there’s already a version of Silent Night on this list, but this is such a gorgeous interpretation of the song that I had to put it in! It doesn’t really rock, but there’s some beautiful playing here from Mark Allen. Very nice!

Check out how well-worn his Fender Stratocaster’s fingerboard is!

Another one that doesn’t strictly rock. This is the only acoustic guitar video on this list; I love Sungha Jung’s fingerstyle guitar playing on his Lakewood acoustic guitar.

I remember first seeing him many years ago on YouTube as a young boy of about 7 years. He displayed some fantastic skills on acoustic guitar and he’d already uploaded a couple of years’ worth of videos.

The first video of his that I saw was his cover of The Beatles‘ Come Together and knew he was definitely one to watch, and he’s since become a successful professional guitarist releasing several albums over the years.

Cool version of the classic song complete with tapping and sweep picking! That and an unbelievably upbeat feel, this rendition just makes you feel good!

Check out the awesome Gibson Flying V Charlie is playing with its crescent moon inlays!

It seems like this is one of the more popular songs for guitarists to cover.

ぎんじねこ or Ginjineko is a Japanese guitarist. I don’t know much else about this guy, apart from the fact that he plays a Gibson Les Paul and was a guitarist who covered JerryC’s Canon Rock, which was doing the rounds on YouTube way back when.

I remember checking out his other recordings and really enjoyed his playing. A couple of years later, he arranged and recorded this guitar cover version and instantly loved it!

He’s done a cool version of Santa Claus is Coming to Town as well.

Sophie has recorded a couple of Christmas Shredlys so far in the last couple of years, with her playing getting progressively better each time. Here she is with her signature Kiesel guitar with 2020’s offering.

It’s a remake of her 2018 Christmas Shredley, which is a great mix of classic Christmas carols and modern Christmas pop songs. I really like the inclusion of Christmas Time (Don’t Let the Bells End) by The Darkness.

Bonus points for Luna the kitten!

I first heard of Funtwo when JerryC‘s Canon Rock was getting big views on YouTube. Hailing from South Korea, Funtwo AKA Oscar Lim JeongHyun had recorded his own cover version of Canon Rock, and quickly made a name for himself as an amazing guitarist. From then on I was a fan!

Check out this 2009 rendition of Rudolph the Red-Nosed Reindeer, which Funtwo plays on his ESP Alfee Custom SEC-28OTC.

I also really like his version of Santa Claus is Coming to Town. He’s also recorded several other Christmas songs, including one this year; if you’re interested check out his channel!

I love this extreme version of Carol of the Bells by Cole Rolland. His arrangement and aggressive playing, coupled with all the different techniques he uses, come together to form a brilliantly hard and heavy rendition of this early 20th Century song.

Cole is very adept at arranging classical pieces for metal guitar and has some fantastic renditions of well-known pieces throughout the centuries!

A little less rocking, this one, but it still sounds fantastic! It comes from none other than the great Joe Bonamassa. He is, of course, no stranger to putting feeling into his music, being that he’s a bluesman, and this song is no different.

I really love his use of the volume control on this one; a technique I’m terrible at using!

He’s more often seen with a Gibson Les Paul, but in this video we get to hear him playing a Fender Stratocaster.

Topping my Top Ten Christmas song covers is this shred version of Hark! The Herald Angels Sing from Scottish guitarist Fraser Edwards in 2017. There’s quite a lot of different techniques used in this rendition, and couple that with a nice upbeat tempo, you can’t help but be impressed with its festive sound.

I also like how the song goes into a minor key after about forty-five seconds in, where it would normally be a very bright and major key sound.

The sounds he gets out of his Japanese ESP Edwards E-CY-165CTM Electric Guitar are amazing!

So there you have it; some of my favorite Christmas song covers by some amazing guitarists. There were so many more that almost made the list, but I thought I’d try to keep it fairly brief.

Anyway, if you have any of your own faves, please share them in the comments below.