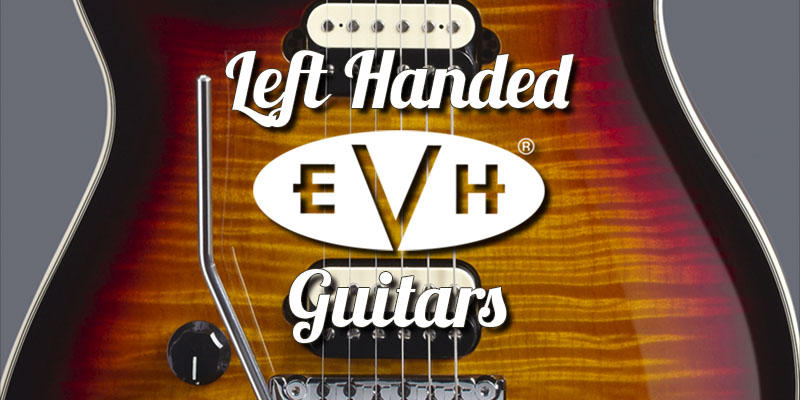 EVH are, of course, the initials of one of the world’s most renowned guitar players, Eddie Van Halen. Through the music he played with his band Van Halen from the late ’70s onwards, he forever changed and redefined how the guitar was played ever since.

With the release of their self-titled debut album, Eddie Van Halen’s distinctive fast playing and aggressive sound became known as the Brown Sound.

His company EVH, which is owned by Fender Musical Instruments Corporation, was launched in 2007, making his guitars available to mere mortal guitar players around the world.

Yes! They do! Let’s take a look at which left handed EVH guitars are available.

Who Are EVH Guitars?

Before we look at EVH the brand, let’s take a look at the man, Eddie Van Halen and his guitars before they were recreated for everyone else to own…

In the early days, Eddie Van Halen famously created his now iconic guitar, the Frankenstein Strat, which he used as his main guitar for Van Halen’s first five albums, and was also nicknamed Frankie.

Like the infamous fictional monster from which this guitar takes its name, the Frankenstein Strat’s parts came from several different donors, and like Doctor Frankenstein of the book, Eddie Van Halen pieced these parts together to form the uniquely famous axe.

This guitar had two custom DiMarzio pickups, created by DiMarzio’s Steve Blucher in collaboration with Eddie and Dudley, though Eddie had traditionally only used the one bridge pickup on his Frankenstein Strat.

Like his Frankenstein Strat, this new guitar also had a Tone knob on a single volume pot.

In 1996, Eddie teamed up with Peavey Electronics to produce the Peavey EVH Wolfgang guitar series, Wolfgang being the name of his son, who was born in 1991.

This guitar was a collaboration between Eddie and Peavey’s Jim DeCola and was kind of a continuation of the Music Man model, but with various changes and updates. This guitar had a single volume and tone, a D-Tuna in the bridge (for instant drop-D tuning), and also a contoured maple top, among other changes.

By 2004, Eddie left Peavey and then released his Art Series guitars with Fender-owned Charvel guitars.

At NAMM 2007 it was announced that he had joined forces with Fender to create the EVH brand we know today.

They began by releasing amplifiers, and then a limited edition replica of the Frankenstein Strat. In 2009, work began on a new version of the Wolfgang model, and after painstaking refining and testing, the first EVH Wolfgang model was made available later that year.

Eddie immediately took it on tour and into the studio and ever since then was his go-to guitar. There have been various other Wolfgang models developed since then.

What Do I Think of EVH Guitars?

There’s no denying the impact that Edward Van Halen has had on the guitaring world ever since those heady days of the late ’70s. He really did revolutionize the way the electric guitar was played and what kind of sounds could be produced from them.

I love the look of the Frankenstein Strat; all dog-eared and taped together. A real DIY feel to it, complete with road-worn battle scars! It’s great that there’s a version of this available to guitarists nowadays.

The various Wolfgang models are really cool instruments too, and the fact that Eddie and his team had spent so long developing this guitar and getting it just right for Eddie’s style of playing, speaks volumes of the care and attention to detail given to this guitar.

In the current lineup, there are three left handed EVH electric guitars available. Check ’em out below!

Please note: Some of the links on this page are affiliate links, which means that at no extra cost to you, if you decide to make a purchase when you click through I may get a small commission. If you do buy something, then I’d like to say “thank you so much”! It really does help me keep this website going.

EVH does not make acoustic guitars, so there aren’t any available to both lefties or righties!

EVH is a company that Eddie Van Halen himself was involved with at every step of its guitars’ and amps’ design. He was involved with everything from designing, to testing and tweaking until everything met his exacting standards. Only then would EVH’s guitars, amps, and equipment be ready for the public.

“I am involved in every phase because I am not endorsing a product – this is my company.”

It’s cool that there are three EVH guitars available for us lefties, all with the same high-performance specs that Eddie Van Halen himself wanted, to create his awesome music.

It’s a tragedy that his untimely death in October 2020 has cut short an illustrious career, but his name will surely live on for generations to come.

What do you think of EVH guitars? Let us know in the comments below.

32 Best Gifts For Guitar Players That They’ll Actually Use

Are Left Handed Guitars More Expensive? The Truth is Here!