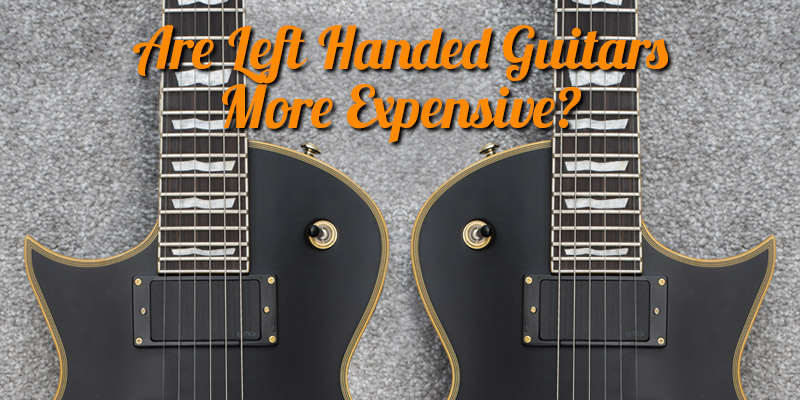 Are Left Handed Guitars More Expensive? The Truth is Here!

Nowadays, especially with internet shopping, the choice for the left handed guitarist is much better than it was thirty or more years ago. Still, right handed folks get a much better choice, with many more models and colors available to choose from, leaving us lefties with only a handful of models and colors from the various guitar manufacturers. Some don’t even make lefty models at all!

Why is this? Are left handed guitars more expensive? What reasons dictate the price we pay for these things?

A few decades ago, left handed guitars were barely available, so players like Jimi Hendrix, back in the 60s had to play right handed guitars turned upside down strung the left handed way. Guitarists such as Albert King or Dick Dale learned to play upside down righty guitars without even changing the way they are strung! It’s great that we have more choices now, but they do come with a price!

In many cases, you’ll find that a southpaw guitar is that little bit more expensive. Sometimes it’s a lot more expensive. I’ve seen some users on guitar forums report an increase of around 20-50% more, so today I’m gonna have a look at why this is.

It does however, seem to be getting better; you’ll sometimes find some retailers selling both lefty and righty guitars at the same price, which is great for us and seems a bit fairer on the left handed consumer. Maybe the guitar companies are spreading the cost to the righties… I guess it depends on which brand of guitar it is too.

So Why Are Left Handed Guitars More Expensive?

Approximately 10% of the world’s population is left handed, so it’d be reasonable to suggest that there would probably be less than 10% of all guitarists needing a left handed guitar. After all, not all left handed people who learn guitar actually play the left handed way. Instead, some learn to play the conventional way.

This opens those players up to a much greater choice in guitar, not having to settle for the black Stratocaster copy from their local guitar store.

I mentioned above about retooling; guitar manufacturers have various CNC machinery to produce a vast range of guitars, and these tools are generally specialized equipment, specially made to make guitars and nothing else.

These machines would have to be changed and programmed differently to make a left handed guitar the opposite way round to a right handed one. This is not a simple process and costs extra money and effort to change for such a small run of guitars.

There’s also the issue of finishing the guitars and the fact that some staff members would have less experience in working with left handed guitars, they would have to be trained to do so, which in turn would add to the cost. Or it could just be that they are used to making right handed guitars most of the time, so when it comes to making a batch of left handed ones, they may have to relearn how to do their work the opposite way around.

Which Guitars Do Companies Produce For Lefties?

In most cases, guitar companies will basically choose their standard right handed models and also the most popular ones. It certainly makes sense for them to do this, as those are the models most likely to sell, and sell the quickest. If a company makes a model that is less popular and they don’t sell them to the retailers right away, then they will have to store those guitars which costs money.

Unfortunately for us lefties, it really is a case of having to make do with a more limited choice than our right handed friends. The retooling, the time and the effort it takes for a guitar company to make left handed versions of their guitars drastically affects their production costs, so it is, however much we dislike it, unfortunately gonna cost us lefties a good few dollars more to buy the guitars that we want.

If there’s a way for guitar companies to be more cost-efficient in the production of all their guitars, maybe someday all guitar models will be available to us lefties too! Here’s hoping…

What do you think? Are left landed guitars more expensive? Is it right, or should all guitarists bear the cost? Please comment below if you have any views.