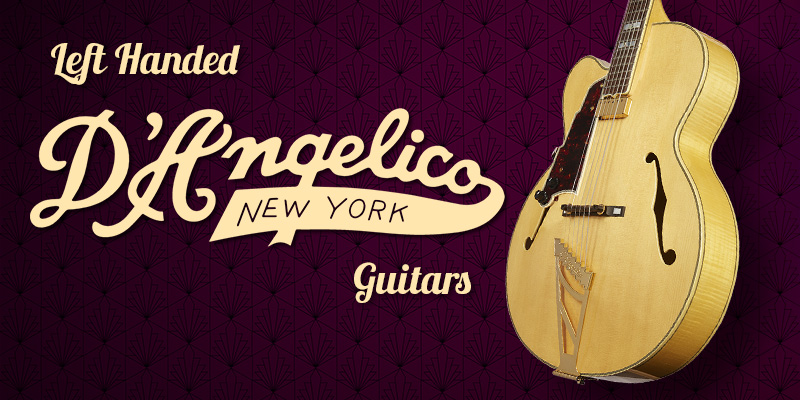 Yes, left handed D’Angelico guitars do exist. Although at the time of writing, there is just one available model from the current lineup; the Excel EXL-1.

There does, however, seem to be a couple of older left handed D’Angelico guitars still available, at the time of writing, so I’ve included them here too. They’ll be in limited supply though.

Otherwise, read on for more info.

Please note: Some of the links on this page are affiliate links, which means that at no extra cost to you, I may get a small commission if you buy anything when you click through. If you do make a purchase, then thank you so much! It really helps me keep this website going.

Who Are D’Angelico Guitars?

D’Angelico Guitars was founded in 1932 in New York City by master luthier John D’Angelico, who opened a small shop in Manhattan’s Little Italy.

Here, John D’Angelico would produce made-to-order guitars using the skills he’d learned from his grand uncle Ciani, who was a respected violin maker.

By the late 1930s, D’Angelico was producing, on average, 35 instruments per year, and by the end of World War II, he had gained a reputation as the “finest builder of archtop guitars”, with his instruments being used by many of the rising stars of jazz at the time.

In 1952, 17-year-old James D’Aquisto was offered a job as an apprentice at D’Angelico, cleaning windows, sweeping up, and running errands.

D’Aquisto would go on to help design and build guitars considered to be of the “Golden Era” of D’Angelico, from the late ’50s to the early ’60s. His designs were recognized for their luxurious and detailed style.

By the early ’60s, D’Aquisto took over much of the instrument production, due to John D’Angelico’s growing health problems, and by 1964, D’Angelico passed away from heart failure at the age of 59.

Much later, in 1999, the D’Angelico brand was taken over by John Ferolito Sr., a businessman, guitar player, and collector.

Several years later, in 2011, Ferolito Sr. sold the brand to new owners; his son John Ferolito, and partners Steve Pisani, and Brendan Cohen, who extensively researched John D’Angelico’s guitar-building to continue his high-quality craftsmanship, with the plan to also make them accessible on a worldwide scale.

Nowadays, D’Angelico takes all the hallmarks of their timeless guitar designs of the ’30s, offering both new and historical guitar models, including archtops, semi-hollows, solid bodies, and acoustics.

My Thoughts On D’Angelico Guitars?

I didn’t really know much about D’Angelico guitars until relatively recently. I’d heard of them back in the early nineties but largely ignored them, as I wasn’t into hollow-body or semi-hollow guitars at the time.

It was only around 2018 that I took a little more notice of them, as I was struck by their fancy-looking features; from the gold hardware to the Art Deco-inspired stylings.

They have exceptional build quality and of course they sound great too!

The Different Types of D’Angelico Guitars

Please note: Where lefty guitar images haven’t been provided on the official website, I’ve flipped the right handed image to show what the left handed version might look like.

So, at the time of writing, there’s only one left handed D’Angelico model from the present range; the D’Angelico Excel EXL-1, available in two finishes.

It’s a shame, as with many guitar companies, that D’angelico doesn’t provide many more lefty options. There are still some older models available to buy at the time of writing, but they could be harder to come by.

It’d be nice to have, at the very least, one of each type of guitar; hollow, semi-hollow, solid body, and acoustic. Ah well, I always say this, but let’s hope there’ll be more in the future!

What are your thoughts on D’Angelico guitars? Let us know in the comments below.